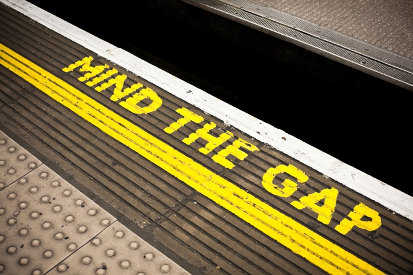 There's a lot of talk about so-called gaps. General wisdom says they will be closed. But is that true? Is there a statistical edge about gaps that we can use in our trading? Let's find out.

Let's first start with some definitions:

We're now interested in what happens most often after an opening gap during that trading session. For this research, we're looking at almost 7000 trading days of the S&P 500. These are the numbers that came up:

There's no denying, there is a clear bias towards closing an opening gap. And it is probably due to the overall bullish nature of the stock market long-term, that there are more gaps up than down. The closing percentage is roughly the same, no matter if it's a gap up or down.

But let's look closer because we have counted each and every gap, small and big.

When you look at those numbers, then the closing-gap wisdom disappears. The normal average daily range accounts easily for closing most (small) opening gaps. In other words, an opening gap does not pull price inwards, it is just our brain interpreting this movement as a causal effect.

In another post, Science of irrationality, in the last paragraph, I mentioned the famous experiment by B.F. Skinner. He made the pigeons in his experiment believe there was a causal connection between their behavior and the supply of food. But there wasn't any, the food was provided at exact regular intervals.

Next time, we're going to look at what comes next when an opening gap is not closed during the same session.