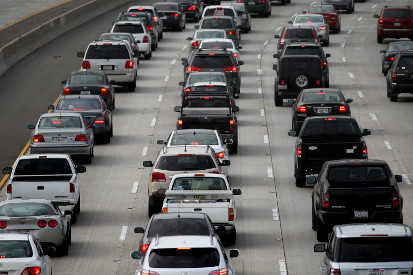 Every now and then, you run into a situation in real life that triggers the trading mind and makes you look at the situation from a traders viewpoint.

A while ago, I had this in traffic while driving on the highway. All lanes were driving slow, but not equally slow all the time. As one lane of traffic came to a full stop for a minute or so, another would speed up. Some minutes later you would see the exact opposite. While this is happening, some drivers will always want to catch the fastest lane. The problem is though, usually no driver has exact information about why a certain lane is slow or fast. All drivers share the same information at the same time which is only the speed of traffic in each lane ("the price of a stock"). So the reason a driver may want to change lanes ("buy or sell") is based only on that information.

The first driver to switch to a faster lane may gain an advantage and actually speed up. But since he was so early in switching, he took a big risk because it wasn't yet so easy to determine the new lane is indeed faster ("he bought the exact bottom"). Drivers who are staying in their slower lane first may think their own lane will catch up soon while the faster lane may slow down again ("it's just a dead cat bounce"). But when this does not happen, a growing feeling 'fear of missing out' starts to play a role. They see the faster lane continuing to be faster. Finally, they can't stand the FOMO any longer and switch lanes. Now the herd is switching lanes and that will instantly make the faster lane grind to a halt ("they bought the high of the market"). Their previous slow lane has completely cleared out and is speeding up and the whole thing will start over again.

Following the herd has been a bad decision, as it is in trading.

Recommended reading:
They, them, you, the market
What's your neighbour thinking?